How Much Power Does My Electric Bike Need?

How Much Power Does My Electric Bike Need?

When it comes to buying an electric bike, you may think that buying the most powerful one is the best option. Although lots of power is advantageous in certain situations, a powerful electric bike may not be the best thing for you.

So how do you decide what electric bike to buy based on the power of its motor?

The Basics Of Power And Torque

Electric bike motors usually have torque figures between 75Nm to 90Nm. Motors with higher torque figures make pedaling easier, which is advantageous when climbing hills. But how much torque you get will depend on what assistance level you use.

These figures will vary between electric bike brands and models, but this will give you an idea of what to expect. How you use the assistance level will affect how far you can ride before you need to charge the battery.

Riding at high assistance levels calls for more power from your bike's battery, depleting it faster. Also, your range will be affected by the profile of your journey. Hilly rides will zap your battery power, as will cold temperatures and excessive weight.

Smaller batteries give your electric bike a shorter range. A large motor will use your battery much quicker than lower-powered motors.

To illustrate how long a battery will last with specific motor power, consider a 250W motor powered by a 500wh battery. If you run it at 100%, the battery will be completely flat in 2 hours.

While high-powered motors are great for climbing hills and powering over rough terrain, there are two main drawbacks of all that power:

More powerful electric motors cost more money to make, increasing the price of your electric bike. However, motor power isn't the only thing that makes an electric bike expensive, the type of motor, brand, and build quality also plays a part. Still, high power significantly contributes to the price.

If you ride a lower-powered electric bike, say 250W, there is a good chance that it will be powerful enough for you. Therefore, you won't need to pay extra for a more powerful electric bike.

We touched on the battery earlier, but aside from the range issue, higher-powered motors require larger capacity batteries. This means the battery is heavier and more expensive.

The extra weight of the battery also needs to be compensated for. The motor has to work harder to carry the weight, which in turn draws more energy from the battery.

Stay On The Right Side Of The Law

The most significant factor in owning an electric bike is the local laws. Different parts of the world have their own rules when it comes to electric bike power.

These rules are so governments can determine what an electric bike is. Bikes with a motor exceeding a specific power rating are deemed motor vehicles requiring a license, insurance, taxation, etc.

Local laws also dictate where you can ride your electric bike. For example, you are not allowed to ride a motor vehicle on public paths or mountain bike trails in some areas.

Most American states currently have a legal limit of 750 watts for electric bikes. However, the rules vary in other countries. In the EU, UK, and Japan, you can only ride electric bikes with a maximum power rating of 250 watts. The limit is 500 watts in Canada and 400 watts in China.

Before you buy an electric bike, make sure it complies with the local laws of where you want to ride it. There is no point in getting into trouble over a too powerful bike for the law.

Here is a rundown of the different power ratings you will find on electric bikes and what they are suitable for:

250W electric bikes are the least powerful ones you can buy. These are more than sufficient for general road use and are great for giving your pedaling a boost when you get to a hill.

Most people who ride 250W electric bikes use them for commuting, as they can get to work without arriving hot and sweaty. But these bikes are also ideal for leisurely rides over the weekend.

250W bikes are excellent for people with mobility issues or rehabilitating from an injury. They can stay active without overdoing it and causing further problems. Alternatively, they can use one of these bikes to keep up with other fitter riders.

A 350W motor isn't a massive leap from a 250W motor, but it gives you extra power if you feel like you need it. The great thing about this power level is that you get more boost without spending lots of money on a high-powered electric bike.

If your local laws permit it, a 350W electric bike is a better option than a 250W. This is especially the case if you carry cargo, are heavier, or ride in a hilly area.

Most people will find 500W enough for their needs, even if you are a medium-weight person riding up hills and carrying cargo. In most situations, anything more than 500W may be excessive.

If you are a heavier rider, you should still find 500W sufficient, but you may want to go for a bike with a mid-mounted motor. Electric bikes with this system are more efficient and give you a more natural feel.

So a mid-mounted 500W motor may be a better option than a 750W hub-mounted motor.

If you are permitted to ride a powerful electric bike in your area and are heavier, you may want to go for a bike with a 750W motor. This is especially the case if you're going to ride off-road and in hilly areas.

A mid-mounted motor will maximize the assistance and help slow down the extra drain on your battery, but it will add to the cost of the bike.

If you are lightweight and only ride on flat and smooth terrain, a 750W electric bike would be overkill. You won't gain anything from the extra power, but you will be paying for it.

But, if you like the idea of lots of power, or your riding is varied, you may benefit from the punchiness of a 750W motor. There is a good chance you won't need all that power most of the time, but it might come in handy on a cycling trip or a pedal through the mountains.

A 750W motor won't give you a significant advantage over lower-powered motors when riding on the flat. You will get faster acceleration from a standing start, but the top-assisted speed is limited, so you won't be able to ride any faster.

An electric bike with a 1000W motor will give you impressive hill-climbing capabilities and allow you to power over all kinds of terrain.

However, most countries don't allow you to ride bikes with this much power on public land. They are often classed as motor vehicles, so riding one would come with strict rules.

As you would expect, electric bikes with 1000W are pretty expensive, so you would need to be pretty serious if you required one. Most people don't need this kind of power, but those who live in the mountains or carry heavy cargo would benefit from it.

These super high-powered electric bikes require a large battery to provide a decent range. Riding one requires careful monitoring of the battery life to ensure that you don't have to push or pedal a dead bike back home.

As you can see, there is more to life than brute force and lots of power. Having extra power is great, but not if you don't need it, especially as it comes at a premium.

The most important thing you should take from this is how important your local rules and regulations are. There is no point in buying an electric bike that is illegal to ride. If you are restricted to 250W, at least your options have been narrowed down, so you can find an electric bike with features that are important to you.

Let customers speak for us

I rarely write reviews,but felt it was important to put my opinion out there. You'll never be sorry you made this investment for your health and wellbeing. I got mine (mint green) and within one week my husband wanted one too so we got him the white one. I put well over 500 miles on it in 3 months time and don't have fancy trails to ride on. I rarely use the throttle as the pedal assist is enough and often just use 2 (out of 5) PAS mode. I have found the throttle helpful at an uphill stop sign and need to get through it quickly. It's easy to learn and feel very safe on it. I highly recommend this Bike and supplier. I had a bit of a wait time for the first one, but it was coming from across the ocean. Electric Zip kept me informed the best they could and this was when all of the container ships were backed up at the ports! When we ordered my husband's bike, it was here within the week. I run out of energy well before the battery does. I've never used up the whole battery at one ride! You'll love your decision on this bike once you make it so do it today before they're out of stock. Enjoy the fresh air and be sure to be safe by wearing a good helmet, bright clothing, and using your lights during the day even! Happy rolling! 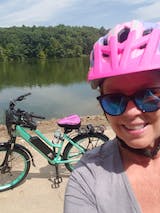 I absolutely love my Catalina Cruiser I received for my 69th birthday. I have to admit, I was a bit scared at first, but after my maiden voyage, I was hooked!
I am averaging 10 miles a day and burning calories effortlessly. I rarely use the throttle because the pedal assist is so easy.
I am having so much fun on this ebike and I can’t wait to get out on the bike trails in the Fall to enjoy all the beautiful colors.

Was looking for a Bike that is built for Bigger Guys and found this one. Working great and price was great also. Plenty of battery life for a day of riding and really makes a difference on pedaling uphill. 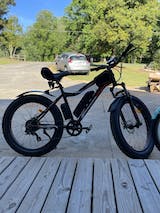 I purchased 2 e-bikes from Electric Zip and I must say these are like my title line says... better than expected. I was and still am very impressed with the quality of these bikes. I ride it everyday with a smile and can't wait to take it for a ride. Being able to go 3 times farther than I would on a regular bike is a plus all in itself. When I saw all the buttons and LCD screen I thought it was going to be a little confusing. Not at all. Very easy to use and fun to shift gears and adjust the PAS. I had to make a few small adjustments on the front brakes but that was easy as well and you get a nice tool kit to do what you need. I love this bike and have told all my friends and co-workers about them and to buy them from Andrew at Electric Zip. And finally... talking about Andrew, he is the most responsive, helpful and caring individual. I trust his company and I trust these bikes.